1. A World Without Borders


‘Whereas recognition of the inherent dignity and of the equal and inalienable rights of all members of the human family is the foundation of freedom, justice and peace in the world.’ Preamble to the Universal Declaration of Human Rights


‘Outside, the secular world had sunk into atrocious conflicts, removed more and more from the “egalitarianism or barbarism” binary that had inspired, that had illuminated our crimes during the seventies and eighties. Barbarism having triumphed on every level, the idea of fighting to get rid of it had become so foreign to official ideologues, so abstruse, that the convictions we still held onto in the prison universe no longer meant anything to them […] The media had relegated egalitarianism to the rank of causes not only lost, but obsolete and forgotten.’ Antoine Volodine 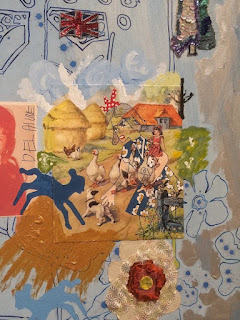 ‘Safe European Home? (Past, Present, Future)’ has been a long term project of the Romani/Irish traveller artists Delaine and Damian La Bas which has been touring Europe in various guises with different guest artists since 2011. The shows main concern as insinuated in the title is the resurgence of far right politics against minority ethnic groups and refugees across the continent, the gradual rise of which they began to notice on their travels as early as 2005. As members of a gypsy community carrying the weight of that old and long history of perennial persecution, they have been particularly well placed to sense this disturbing slide towards right-wing populism.


With perfect timing this evolving exhibition has landed on our own fair shores – beached up, as it were, in the provincial half-forgotten seaside town of Worthing – just as the shock of our exit from European membership is about to become a reality. The timing and location are important: the show acts as an ethical thermometer away from the endless farce going on in the privileged cloisters of Westminster in its vain search for an ideal deal with Europe, but also in a town seduced by the referendum’s leave campaign. And this thermometer finds us being given an urgent slap in face.


The show which is a heady mix of installation, archive presentation, photo documentary, painting and bricolage blows the squabbling politics and squalid media narratives out of the stormy Brexit skies clearing the air for some serious and sobering soul searching. The guest artists are Alex Michon (who worked closely and supportively with Delaine on putting this show together in the absence of Damian who tragically died before his time at the end of last year) and Julia Horbaschk. 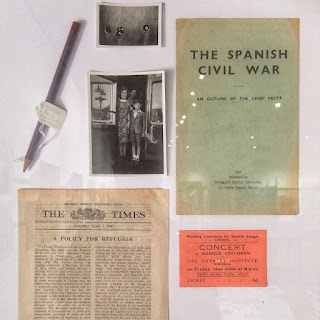 Other artists including Walter Sickert, Hugh Blaker, Stanislawa De Karlowska, and Keith Vaughan have been thoughtfully curated into the exhibition from the museum’s collection. 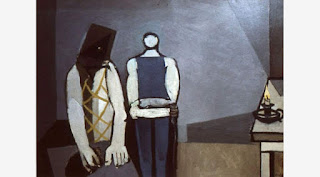 Julia Horbaschk, a migrant herself, uses her photography to document Eastern European migrants from her adopted hometown of Brighton. Portraits of young aspiring people in front of their places of work are then repeated with the subjects removed in a sort of dire dress rehearsal of the near future. Horbaschk also presents extensive documentation of refugee displacement and migration from the museum’s archive dating back to the 1930’s. As Horbaschk points out, these documents show how accommodating Worthing has been to refugees. In one particularly moving example a ticket for a charity concert organised by the Worthing Committee for Spanish Refugee Children reads ‘THEY NEED YOUR HELP’. These children had found refuge from the Spanish Civil War; fleeing Guernica, Franco, Hitler. 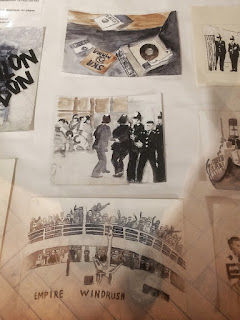 Alex Michon also combines recent and current histories. Her work with punk band The Clash in the 1970’s put her on the front line in a fractious era remarkably similar to now. Back then organisations like the National Front were openly and unashamedly racist and events like Rock Against Racism were organised to counteract them. But there is a difference between then and now. The NF were violent and thuggish whereas their current reinvention as the BNP and that other even more cunning
offspring UKIP brought with it the wolf in sheep’s clothing approach – suits and ties or pipes and slippers rather than boots and braces. Michon’s off kilter ‘activist in the bedroom’ watercolours and drawings make an appeal to a younger generation mesmerised by their laptops, gaming and selfie culture as well reminding older generations how complacent and lulled we’ve become. There is an underlying nostalgia in her work which urges us to wake up and take to the streets in outrage against current scandals such as Windrush (one of first indications of cold-hearted Brexit bureaucracy in action) and the Grenfell disaster (a dreadful and inevitable result of the ever growing wealth divide plaguing this country). ‘BABYLON-DON’ she scrawls across a painting of the burning Grenfell tower; ‘KNOW YOUR RIGHTS’ across a portrait of a contorted diva reminiscent if not visually but metaphorically of Ami Winehouse’s lost soul; ‘BLACK STAR LINER’ down the side of a hopeful boat arriving from Jamaica.


‘Strange, he commented to himself, how early memories persist and remain untouched by later experience. For he had hardly left his primary school when the Austro-Hungarian Empire had ceased to exist and that map had been rubbed out and redrawn with different contours. He knew this one, of course, but it never made a visual impact on his mind; whereas the other map, obsolete before he had even started on his adult life, remained indelibly imprinted on his memory.’ Elisabeth De Waal 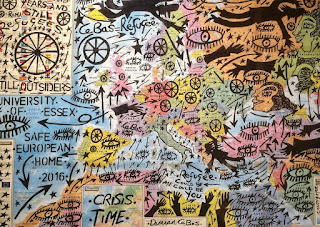 Everywhere there are maps in this show. Official maps, invented maps, maps with missing pieces, maps being redrawn, metaphorical maps, maps transgressed or defiled, and of course like all good exhibitions there are mappings of memory.


Damian Le Bas made many maps. They often swirl and bluster like a shocked tree losing its leaves prematurely in a crazed weather system. Sometimes they grind and rage more like mechanised capitalist machines going into burnt-out overtime. And sometimes they’re just beautiful, confessional, anarchically decorated and slightly potty. His maps are concerned ultimately with freedom of movement and freedom of thought. They remind me that whenever you travel you are a temporary nomad passing through a territory that isn’t really a line on a map but a line in the mind which hopefully gets broken and recognises its own insecure subterfuge. ‘REFUGEE COULD BE ME COULD BE YOU’ he often declares. ‘ALWAYS OUTSIDERS’ is another mantra. I’ve just returned from a tiny idyllic Greek Island where I found the Port Authority opened onto a small plaza with sundecks and bar next to the sea. There were a few tattooed drinkers and an overweight sunbather on a lounger while crammed into a shady corner a few yards away ten or more pale Syrian refugees with tired cobweb stares awaited their problematic fate. I should have taken a picture of this distressing scene but just wanted to get the hell out of there. ‘THERE’S NO PLACE LIKE HOME’ stencilled on another map of Europe, fluxing here and fluxing there. 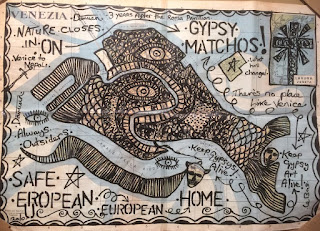 When you walk into the show the thing you can’t help but notice is Delaine Le Bas’s giant white sheet pinned and sweeping like a long lost peace flag with the Universal Declaration of Human Rights scrawled across it. On my first visit there was a talk where Delaine described the making of this piece and how in copying out the Declaration she became hypnotised by the words. Read them and absorb them like I did, she told us, you’ll be surprised how obvious they are but are so easily side-lined by the powers that be. Someone asked why she’d slap-dashed a demented insinuation of Mickey Mouse in the middle of it. It just felt right, she replied. 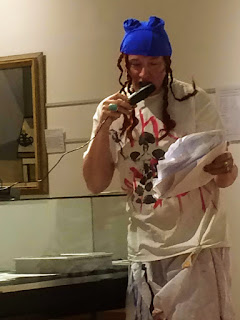 Delaine’s work is manifold employing performance, installation, video, bright Romani inspired costumes and politicised text and quotation: ‘MY MOTHER SAID YOU SHOULD NEVER PLAY WITH GIPSIES IN THE WOOD […]’ Her painting often has a chaotic/anarchic feel underpinned with quaint rustic lore intertwined with gypsy inspired irony – like Francis Picabia on speed. And comparable with Picabia she shuns convention, superimposing the two-dimensional plane to honour the multidimensional nature of narrative flows while flirting respectfully with kitsch aesthetics. Her message runs in tandem with Damian’s, exploring identity politics through her gypsy heritage; using it to question received prejudices, but also as a mirror of how society expects you to fit in and deny your own creative/nomadic impulses.


On a costume made for a show in Thessaloniki, Greece 2015 she daubs in a thick marker pen: ‘FUCK GOLD, FUCK MONEY, FUCK CAPITALISM’ reminding us that the financial crisis of 2008 and the draconian austerity which ensued is the real cause of all this discontent as well as the alarming resurgence of a Nationalist International. 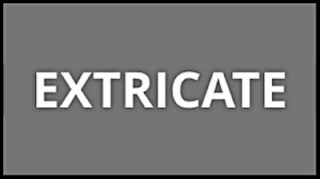